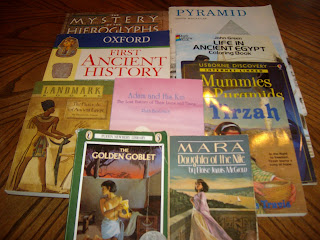 A year ago the original plan was to use the history guide from Simply Charlotte Mason and start the six year rotation of history in chronological order. So 7th grade year was to be the study of Ancient Egypt and for geography Africa. I won the first volume of The Storey of the World early this year and Grace really enjoyed it. After we finished volume one I purchased volume 2 along with the test booklet because Grace was not doing well with written narrations. Next came my indecision - Do I continue on with Storey of the World volume three and four. Next I found a new curriculum offered by Queenhomeschool that looked very interesting but it would have messed up our six year rotation of history because the new curriculum was for American History and it was used for grades 1 - 6. Which means really couldn't use it next year, just getting to old for the curriculum. Received an email yesterday from Simply Charlotte Mason introducing their new American History and World History Spines. Looks very interesting. But again it would mess up our rotation. Started thinking about studying world history and American history side by side just like alot of families do through Ambleside. But ultimately decided that would just be too much. After receiving the email from SCM yesterday I took another look at the new revised version of Genesis Through Deuteronomy and The Study of Ancient Egypt. I already had most of these books on hand and something just clicked in my mind that it was the way to go for next year's history. Sometimes we should just stick with our original plans and not look for the grass is always greener scenario. Another reason I decided to stick with this original history plan is that we are interested in purchasing a DVD Art program and could use the money saved from not buying new history materials to pay for the dvds. So without further ramblings here is the plan for next year. The only items I need to purchase are Letters from Egypt and the Genesis Through Deuteronomy Handbook from SCM. Included in the picture above is:


Below you will find a picture of Grace's literature read for the beginning of the year to tie in with our Ancient Egypt study. I know it is not a classic and shouldn't really be considered literature but she really enjoys all this author's books. This history study also includes reading the first four books of the Bible and using them as actually history from the beginning of time. All of the above should take us the entire year. I really love how you get to delve deep for an entire year with a subject. This also means that we will go back to written narrations again. 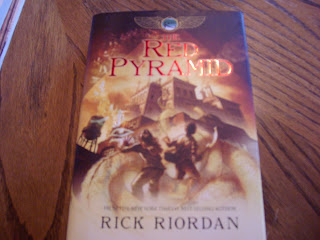 I'm glad I saw your post! I stayed up until about 12:30 or so last night, looking at curriculum online. I have several Beautiful Feet studies sitting on the shelf right now, but still looking around - just in case.

Collin will be going into 7th so I'm trying to map out our History up to 12th grade so I don't repeat or miss anything.

I've never looked at SCM so I'm going to check that out.
Thanks!

We had a similar experience--we started with Story of the World, then incorporated lots of living books. Now we just use SOTW as a basic outline.

My kids were crazy about ancient Egypt--they would have studied it all year if I let them!