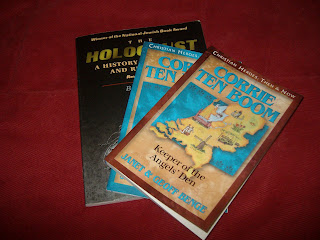 For Literature Grace is reading Christian Heroes: Then and Now Corrie Ten Boom, Keeper of the Angels' Den. This is actually the second book in the series that she has read. The first was about Gladys Alyward and her missionary work in China. Obviously in this book there are many references to World War II, Adolf Hitler and The Holocaust. We have not studied much history about this time frame because I was waiting on Grace to mature a little and be able to handle it. So much tragedy and sorrow. I decided to buy another book to go along with it for me to read to her to give some background information on Adolf Hitler and what was going on in Europe at the time. I think it has been very eye opening for her to hear what actually happened during the awful time in our world's history. The Corrie Ten Boom book came with an unit study booklet. We are only using it for the chapter and discussion questions.