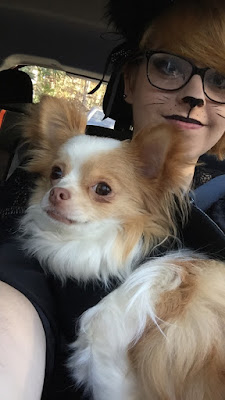 Friday night started off the fun weekend activities. We attended a Fall Festival at the private school Grace attends two days a week for math and science. Her plans were to dress up both the dogs the following night and take them into town. Friday night was a trial run for Zeus. He went as Grace's "date" due to her significant other marching in a football game a few counties away. They went as Batman (Zeus is wearing bat wings) and cat woman. He was a very good boy but was scared most of the time, so we nixed taking them the next night were the crowds would have been huge and overwhelming. 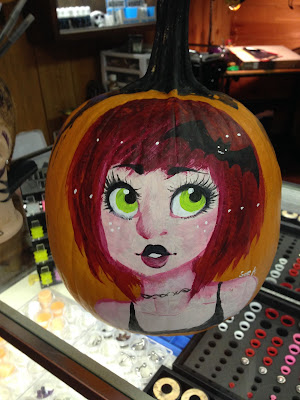 Grace painted another pumpkin this year for a contest at the school. If you remember last year she also painted a pumpkin with a scene from Nightmare Before Christmas. She won first place. 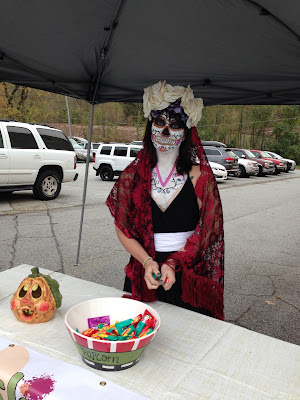 Saturday night we attended a long running tradition in Clarkesville of trick or treating up in the town square. Each business hands out candy. Think huge crowds and lots of candy. We stayed only a short while. The kids, and I use that term lightly because we are talking about teenagers, were disappointed that hardly anyone got the pun of their costume. "When life hands you lemons". 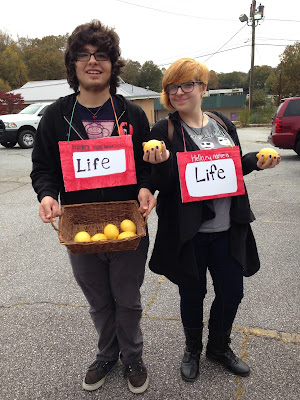 We headed straight over to my sister's house for a costume party. Great food, bonfire, costume contest, family, and friends. My sister is always great at the decorating thing and making sure her guest have a good time. 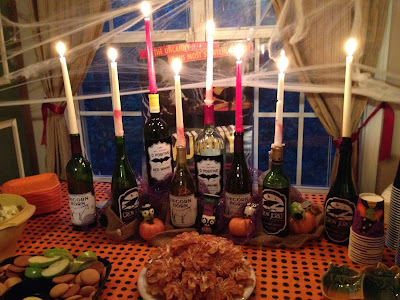 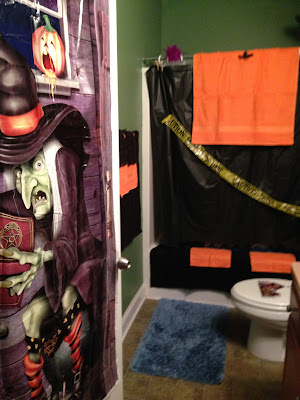 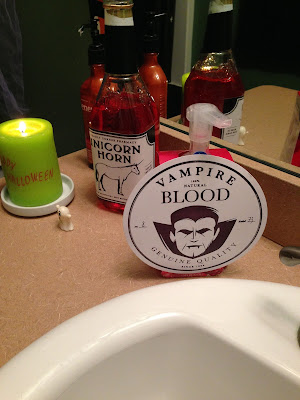 It was a good Halloween. With Grace being a junior this year I maybe have one more before she really starts doing her own thing. That's kind of said, but I'll take the year and hopefully in the future (very distant future) I might have grandchildren to walk around with on Halloween. My parents have always been involved in the Halloweens with my kids which makes it even more special.

There are some natural remedies that can be used in the prevention and elimination of diabetes totally. However, the single most important aspect of a diabetes control plan is adopting a wholesome lifestyle Inner Peace, Nutritious and Healthy Diet, and Regular Physical Exercise. A state of inner peace and self-contentment is essential to enjoying a good physical health and overall well-being. The inner peace and self contentment is a just a state of mind.People with diabetes diseases often use complementary and alternative medicine. I was diagnosed with diabetes .It was at work and  feeling unusually tired and sleepy. I borrowed a cyclometer from a co-worker and tested at 760. Went immediately to my doctor and he gave me prescriptions like: Insulin ,Sulfonamides,Thiazolidinediones but Could not get the cure rather to reduce the pain but bring back the pain again. i found a woman testimony name Comfort online how Dr Akhigbe cure her HIV  and I also contacted the doctor and after I took his medication as instructed, I am now completely free from diabetes by doctor Akhigbe herbal medicine.So diabetes patients reading this testimony to contact his email     drrealakhigbe@gmail.com   or his Number   +234 802  501 2866   He also use his herbal herbs to diseases like:SPIDER BITE, SCHIZOPHRENIA, LUPUS,EXTERNAL INFECTION, COMMON COLD, JOINT PAIN, EPILEPSY,STROKE,TUBERCULOSIS ,STOMACH DISEASE. ECZEMA, GOUT, PROGENITOR, EATING DISORDER, LOWER RESPIRATORY INFECTION,  DIABETICS,HERPES,HIV/AIDS, ;ALS,  CANCER , TUMOR, HEART HEALTH, MENINGITIS,HEPATITIS A AND B,ASTHMA, HEART DISEASE, CHRONIC DISEASE. NAUSEA VOMITING OR DIARRHEA,KIDNEY DISEASE. HEARING  LOSSDr Akhigbe is a good man and he heal anybody that comes to him. here is email    drrealakhigbe@gmail.com    and his Number +2348025012866